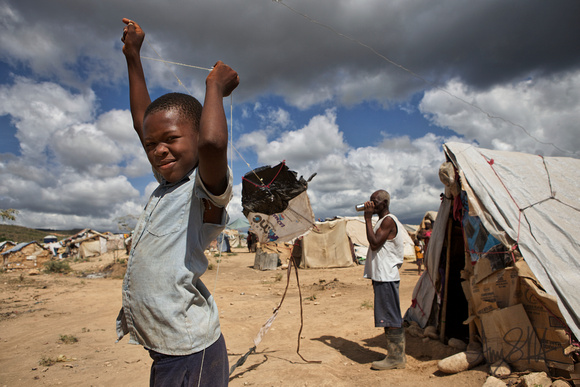 These images are from November 20th in Pak Kabo where 'deportee camps' have sprung up on the Haitian side of the DR/Haiti border just north of Anse Pitre. It is estimated that over 3,000 former residents of Dominican Republic live in these southern camps, and over 10,000 throughout Haiti. These individuals arrived in the camps after having been forcibly deported or choosing to leave due to physical and verbal threats soon after the Dominican government changed immigration laws, effectively leaving thousands stateless. Some of these individuals were born in the DR and had never set foot in Haiti prior. Most came with the few things they could carry and some came with nothing at all. All had been targeted by the color of their skin and the manner with which they spoke.

The tents within the camps are made of plastic and old clothes, which let in the dust and rain. Many have fled Dominican Republic and their established homes in fears of a massacre of those whose appearance or speech would betray their Haitian roots. They were threatened with the possibility of an event similar to the Parsley Massacre of 1937 in which thousands of Haitians were slaughtered under the Trujillo dictatorship. One man had lived in the Dominican Republic since 1974 and raised a family there. When he was physically threatened and told that he and his family would be killed, he gathered his children and grandchildren and fled to the border. They lost everything. There are also stories of Dominican officials taking advantage of the fear. A family living in the Barahona region of the Dominican Republic watched their home burn down after two 'forestales' (forest rangers) walked in, lit a stick on fire in their cooking stove, and ignited their home. Six of the seven children were born in the Dominican Republic, and their birth certificates burned with the house. They now cannot prove Haitian or Dominican citizenship. The Haitian government gives the deported $30 for transportation back to the place that they came from in Haiti, but in many cases it is insufficient or after living in the Dominican Republic their entire lives, they have no family in Haiti. Stories arose that the Haitian government does not want aid at the border camps because they do not want the camps to become permanent -- both discouraging foreign aid and blocking domestic aid. There are organizations that are helping, such as the Jesuits in Malpasse and other small organizations, but it does not seem like there is a considerable or consistent effort to provide assistance.